Yorick, being fleshless, loves his utilitarian THINGS.  Deep inside he is still the ancient romantic medieval jester, to whit … the poetry still flows in riddles.

The answer to this love poem for this utilitarian thing, next Friday.  Enjoy!

Above the winds angels picnicking …

…trailed mechanical wind spewing; above even them.

Down below neurotic dilettantes, momentary primitives, must imagine the wild.  No folks resplendent in costumed violence roam (as Adam and Eve would have known), only conglomerates of rational violence; the perfection of intimidation and killing.

And yet the winds remain (some would say,  increase) the result of wildness monetized.

Stale jokes, Yorick considers how stale his medieval jokes are here in a rural province during the 21st Century.  As a fictional resurrected jester, experienced only with the courts of pompous oligarchies, adept only in archaic language.  Reflecting on the limits to original humor production, he fiddles with an oversized scepter and a mass produced nimbus (a halo used to designate saints in paintings from his era).

It seems that stagnated pharisaical types among the emotives here in the tent have started throwing these around, bored by mundane religious prosperity.  What first served as a means of honoring the honorable, seems more a war of aliens.  Bumblers in bleacher seats attempting to add or subtract squalid sequins that are best left to Heaven’s Compliment.

Yorick had hoped to be benimbed (granted a halo) for attempting to lightened the spirits of dark-age despots, thereby making life better for their subjects; perhaps he failed.  And now the outdated humor is maybe … stale. 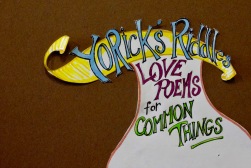 The answer to last week’s riddle?

What you say, love poem? Yes, but only when it turns green, the color of life moving on.  The other colors (and the winking) certainly means that someone must just want to look at me, and hold me stopped; their love possession.  Alas, this may seem paranoiac but I like to think of the world as personal, not some random computer-generated authority.  To whit, the anarchist out of step with Times.

Yorick once again considers the love of things, utilitarian things, and writes a love poem for your consideration.  It is but a riddle, take heart! 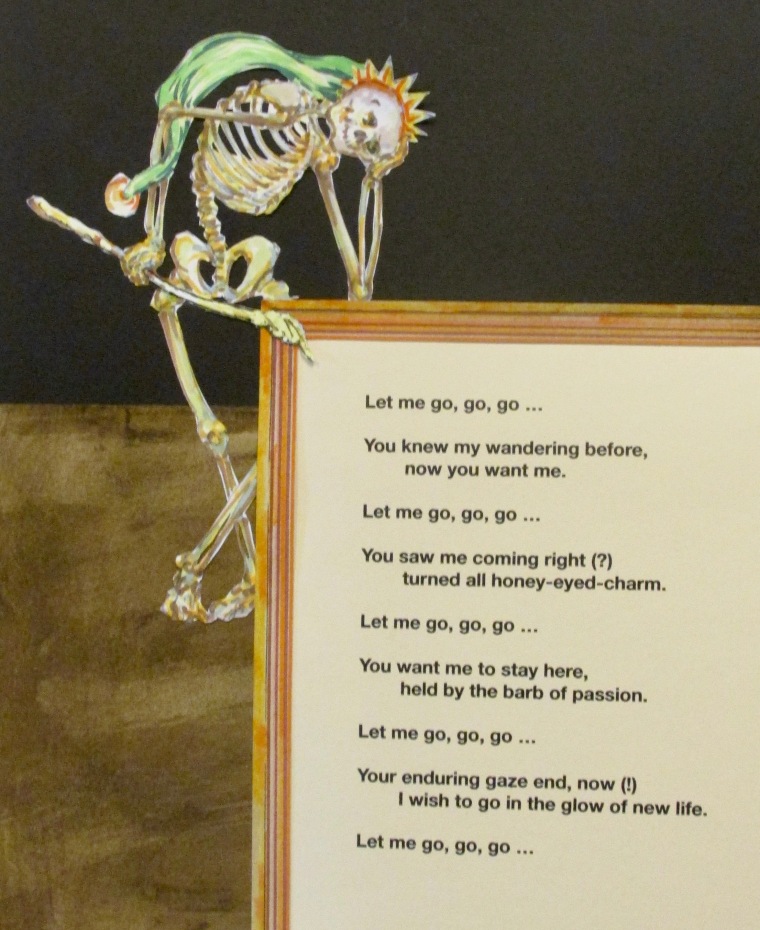 The answer will appear next Saturday…

Spring brings forth little surprises that last fall were common and non-surprising; unless, of course, a spider appeared. 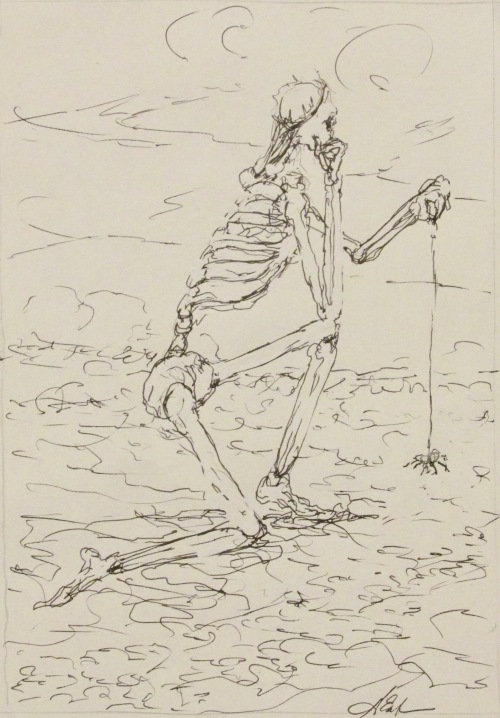 People, including emotive artistics, have little fondness for the sudden awareness of a spider; react, startle and avoid, or pursue that fear’s demise.  The first spider of this season (alone, a bit early) was spied by Yorick.

Babbling contentious emotives are considering devisive issues here, as in most places.  Here the greyed-out dividing line between Empathistic or Sympathistic views and actions seems to widen.  Whether an emotive can (“should”) have empathy and therefore act on a matter; or, sympathy and accept inhibitions to action.

The heartlessly pursued arguments sent Yorick for a walk, to whit, he encountered the arachnid.

As a fluid-less exoskeleton Yorick can have a pet to walk with a self-elongating leash, and in a gesture of empathy attempt an imitative nod to the master of geometry. 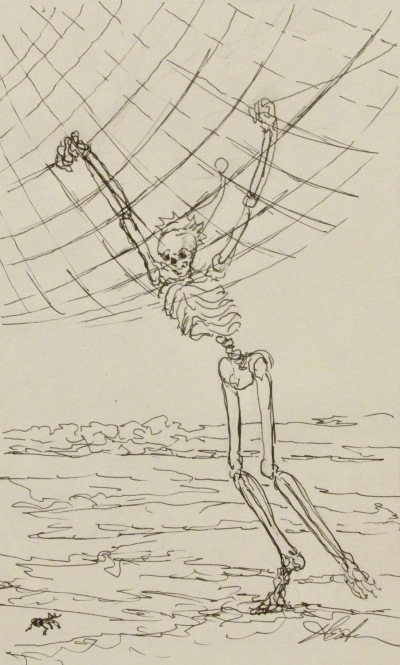 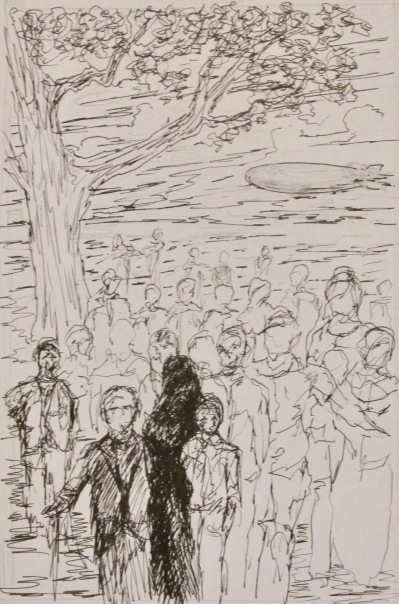 The sky whirling and falling from the clouds of snow has been relinquished as a topic of conversation; a weakening of the tensions from a winter of frozen enclosure, the worry of stumbling on ice.

Anarchistic emotive artistics have spent the winter here in the tent housing The Temporary Museum of Enfant Terrible Culture, this is the first exit by those suffering from extended cabin fever.  The green still has not returned to the treetops; the sky above is wafty bits of clouds, not grey brooding sleet dispensers, a bit early for the luxuriously picturesque fearsome late-spring behemoths.

A simple wandering about refreshing and de-stressing should encourage a general pleasantness.

But, as it is, the excitement of new phenomena (even a seasonably warming sunshine) is easily manipulated into a type of mass hysteria.

An emotives excited pointing-out of fast-multiplying unlikelys, creates an agreed upon unease; even if there really isn’t anything seen that is worthy of exaggeration into hysteria.

Forewarning, though, is a profitable service by hot-aired emotives sure of their need to lead by unreasonable harangues. Some “thing” can surely be found as a topic of dread.

The emotives find no reason not to go along with an agreed approaching doom, no matter how obscure, absurd, and unrealistic. Fear, as you know, is the always realistic to  emotives.

Soon enough, some means will be commended, the objects of violence deemed necessary for an absurd offense against an oblique oversized unknowable hysteria.

And to that end, all will forego a general pleasantness walking under wafty clouds.

If this is supposed a happy constellation, and right-here but an errant star-child corroded by unhappy actors, emotives, entwined with anarchists ( looking for their sole satisfaction); then what is to be said for the now proliferating off-spring in a defrosted garden?

As winter passes the hawk gathers the wind, the serpent – the warm, the cat emerges from domesticity; in pursuit of the bunny rabbit, furry cute protein.

This being violence, it is the way the world is, ask any bunny rabbit.

Invoking a sense of peace is real, here and for the bunny rabbit, but it is the peace amidst the nervous; pricking greyed-brown thickets for green shoots. A search for a treasure popping up from the heaving frost melting into simple wet.

Welcoming the sun in near nakedness, He & She will have much to pay for a treasure search in the thickets (fear?); perhaps for knowledge unnecessary to the bunny rabbit.

pushing aside the prickles, for a brief metaphorical grass filament, in the clustered thickets.

Perhaps the bunny rabbit construes necessity, and so hops into the sun’s fatal freedom.

The answer to last week’s riddle

Try it out, a love poem for an often insulted (because we don’t care) common thing.  Please to not bury it in your rage, and come back again. 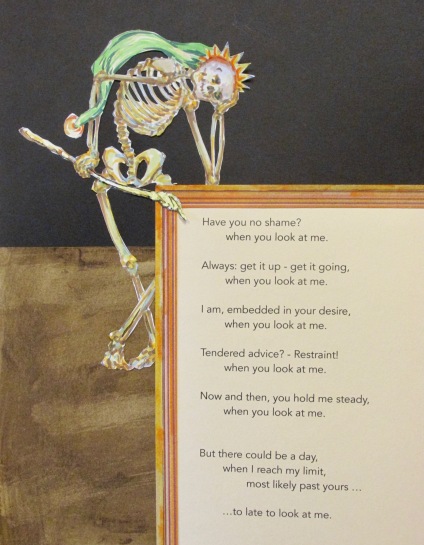 The answer next Saturday here at anachronisticanarchist.com.