As to last week’s riddle, what would be better in August’s muggy heat than a …

Reciprocating Fan !     or do you say

Yorick has love to share, so uses reciprocating, more of a humane idea; returning again and again spreading some goodness. It is a bit to mechanical to say oscillating, don’t you think(?) …

… if love is what begins the idea.

As it is, oscillating seasons [ the tipping of the planet ] produces variable placement of heat.  A reciprocated affection for that hazy blue-green ball would potentially return to – how is it shared – reciprocating beneficence.

Historically anachronistic Yorick has little personal concern of the approaching big heat-up ( bit more bleaching of his bones probably won’t make much difference ).  But, he would have you consider his present location.  There is much to be said for a place where the effluent of the ice-ages, melted completely and rearranging well known shores, will not inundate. 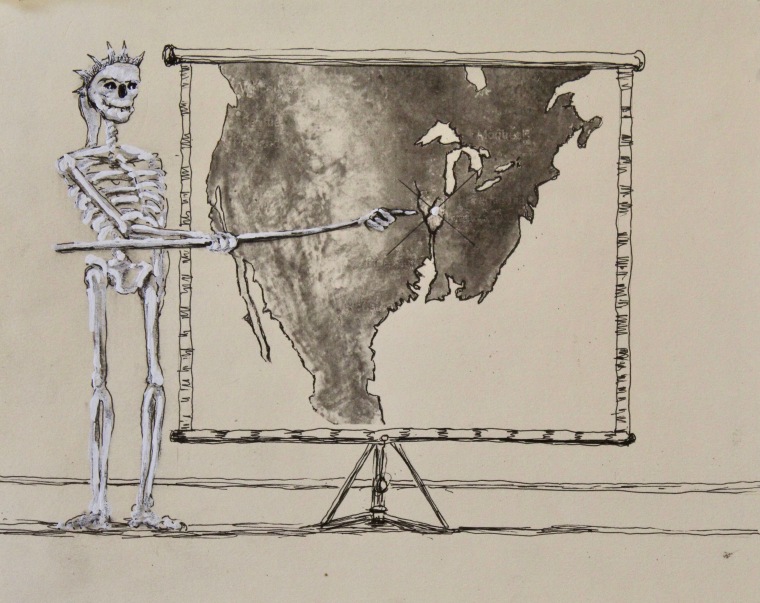 Future visitors and residents probably will still need oscillating fans, and maybe (maybe?) return to being reciprocating fans of the planet.

It is perspiration season here on the prairie, its’ even hotter in other places.  “To whit” (as he credits this moment) Yorick notes the pain, and remembers the burdens of flesh; and, even a skeleton appreciates certain contraptions. 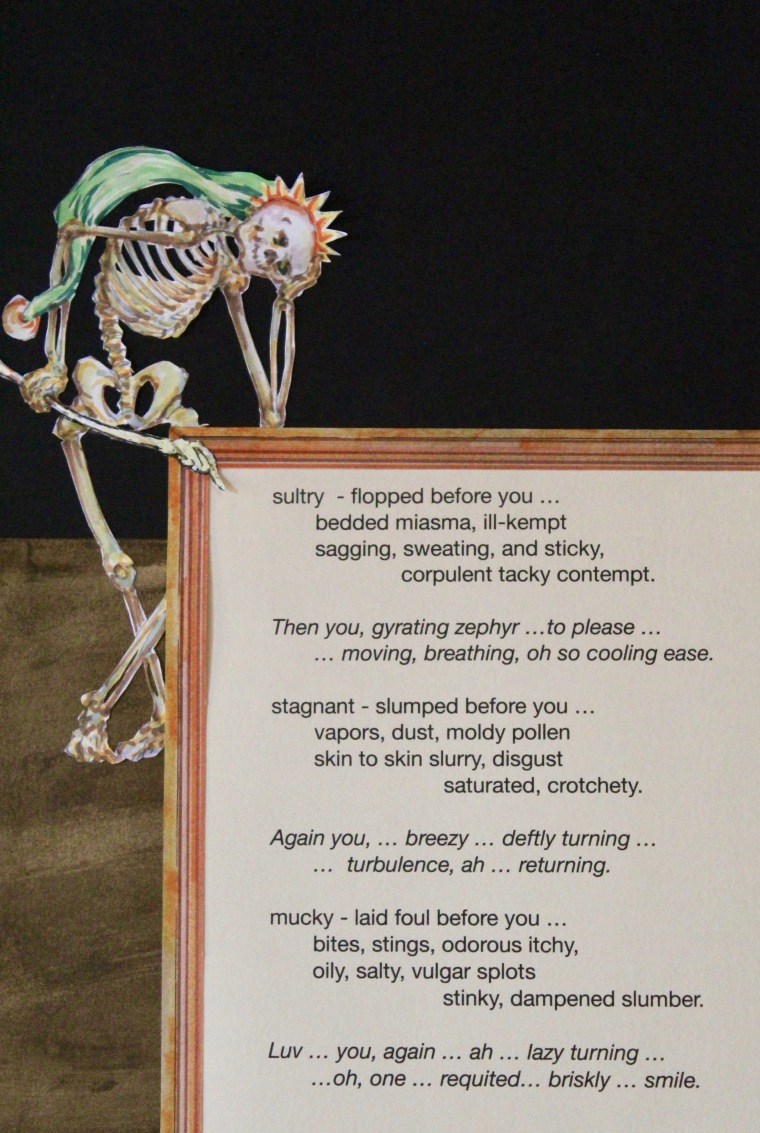 If all goes well, and the fires don’t spread into prairie-digital worlds, then next Friday Yorick will provide an answer.

This folly? The fantasy that the grey slouch doesn’t matter (all surely think him young … and acceptably feral); and do not consider the corporate joint and muscle dissolution.

Ah, but he would counter; do any of us really know who pulls our strings? And wouldn’t a mask of a smile be just as good?

Maybe, with a proper puppeteer, he could dance lightly, a bit more delicately;  maybe.

… there’s a word … dangling out there.

Loosely held, not troubled over, freely flowing; the hand of a nineteenth century inked letter, nice … even beautiful: or (to the negative) – truth, loosely palmed.

The planet unmoored, ungripped to a moral idea (a probable cause of stress) nervously retrenching into idolized precision; but,

… to grasp so as to loosen?

On the prairie, detached unstrung, He & She (a pair out of a third of a billion countrymen) consider bindings;  detached conversation, the wind, and desire … set loose.

Loosely applied, spoken or acted, true or false; it would be easy if maybe a thing, an object, a gift, a wildness … was set free 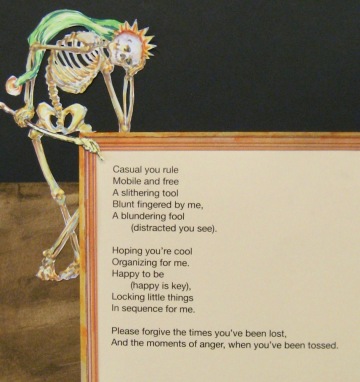 So, did you get last weeks riddle? maybe while you were dangling and clanging your Key Chain??

Wouldn’t it be nice if every riddle was so easily solved (or dismissed).

Yorick is out wandering the prairie; just imagine marbled cerulean above and dappled green, really really green below.  Such is trusted this time of year.

Nature and judicious tending typically remove the mystery of growing.  But the reaping, (where lies can’t confuse the numbers) is a puzzle, months from resolution.

As usual, Yorick, (lacking the fleshy problem that leads to love poems) must utilize his romantic yearnings on utilitarian objects.  Being a jester by character and profession he will leave you, just for a week, as you ponder this riddle.

A week from today … the answer.

He went out to play, just for fun. 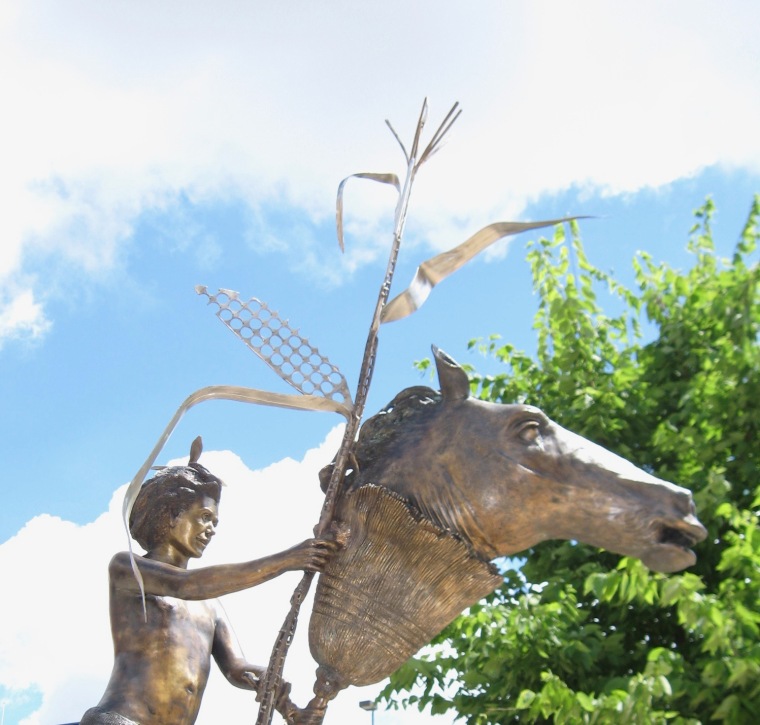 Adventure imagined, exploits, joyful courage; just with what is present, just for fun.

What will succumb first to hostile reality, skeptical selfishness, and the detritus stumbling stuff …  imagination?  Then what?

Will the broom be put to ancient use when the stallion no longer appears?

Replaced by the ethereal wonder of damsels?

Will this training give status with reigning oligarchs or seduction by high-celebrity she-devils? 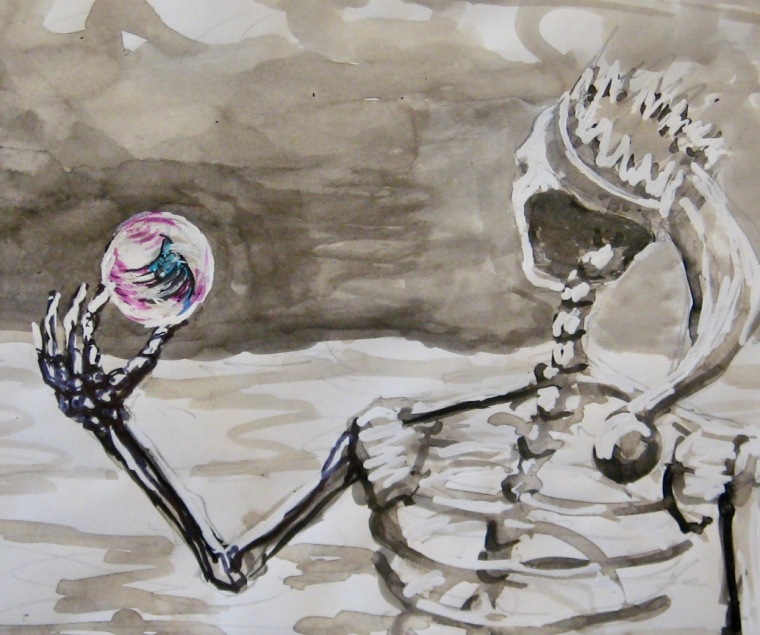 Small-minded places shrink, or so Yorick has observed.

Jesters never rule … but could they?  Jokers (a different type) wise-crack bits and baubles of snideness capturing a fear-filled popular audience.  The shrunken world fits into smaller and smaller trinkets; fit for a joker’s self-amazement.

Yorick considers the devaluing of free laughter a smallness, not the  humor of jesters.

Roses, the troubled lovelies so often shared; have entranced many of the emotive elites here at the tent sheltering The Temporary Museum of Enfant Terrible Culture.

This canvas harbor of bounteous artisticals has brought forth a new design – imposed upon nature; a hybrid rose planted at our tent-flaps.

Roses, by nature, prick the skin; but smart manipulative emotives have developed a spiny – piercing variety. Planted in a lovely garden at the entrance (remains of what once was the farm-wife’s small, but much labored, flower patch) the emotives new herbage enforces respect for property … newly described as private.

by other people’s children.

Yorick, still passionate (and absurdist compatible), would like to point out to those of you who still lust in the carnal sense that there are deep within him many poetic ideas.  This poetic spirit is not to be wasted and now is enthralled with the utilitarian things he still has. And so the answer to last week’s riddle is … WALLET…! 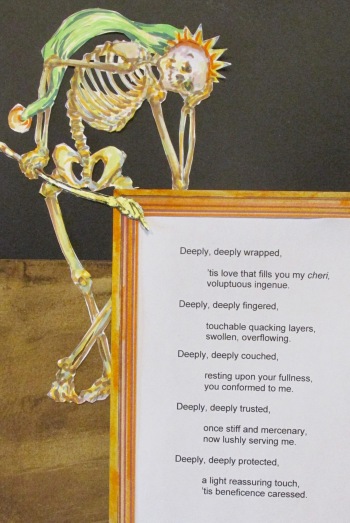 If you had deep carnal expectations when you read it, now you can see … its’ just the money.