Lifting one’s mind, that ephemeral contrivance so loaded, with what will we trust its’ bobble, wind? or an intimidators poke?

Yorick, our 16th century enfant terrible and skeletal bit of wisdom, has just walked out of the following pictured tent, enclosing the venerable white walls.

We who administer the tent, now budding into The Temporary Museum of enfant terrible Culture, have been meeting with the various factions.  First, issues of wires and hangers and frames and “desecration”of the white walls has been, well, whitewashed. Second, when we acquired the old circus tent an antiquated sign came with it, “E pluribus unum” it read, and we trusted it a suitable greeting for the variety we invited. Unfortunately the invited “pluribus” are of the opinion that anarchists, enfant terribles, and other intimidating artistics are to individual to become an “unum”.

There was an opinion for keeping the old sign as an encouragement for artistic interaction, camaraderie, and collaboration. The opposing side expressed an idea of having a trusted benevolence, unconnected to any group (save the most influential) to determine those activities; for individuals.  Yorick (the mentor and late jester of maybe the most individually intimidated enfant ever), was proposed as the benevolence. He is a category of one, a singularity among a lot of similarities. Yorick responded that he didn’t want the authority, and if he had the authority, he would dig the “e pluribus unum” sign out, and rehang it.

As the discussion (or rage), poking fingers, and emotion-bomb lighting continued, Yorick was beset by a plethora of anarchists calling for his ascendency. However few  were inclined to agree with him, or with we who have been trying to further this project.  And so he stepped out, as megalomania and fiery bombs reigned within. 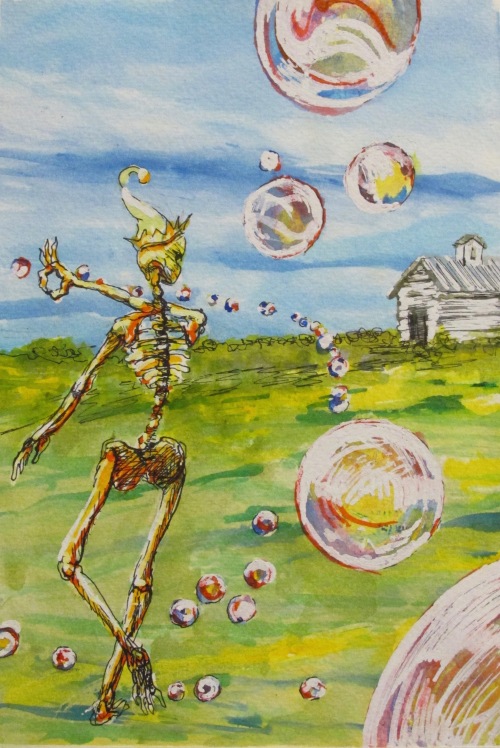 And so he began making zephyrs, (doldrums are now on the prairie); and finding fruitful employment swirling soap bubble bombs. 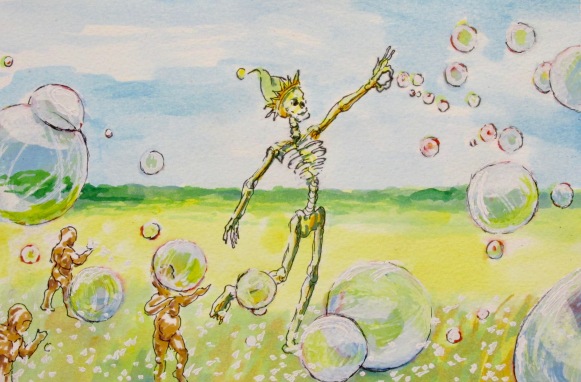 Little enfants (his “unum”) enjoy this sensible specter of death; and for the pluribus (?), they rage in the tent poking at wafting bobbles of nonsense.